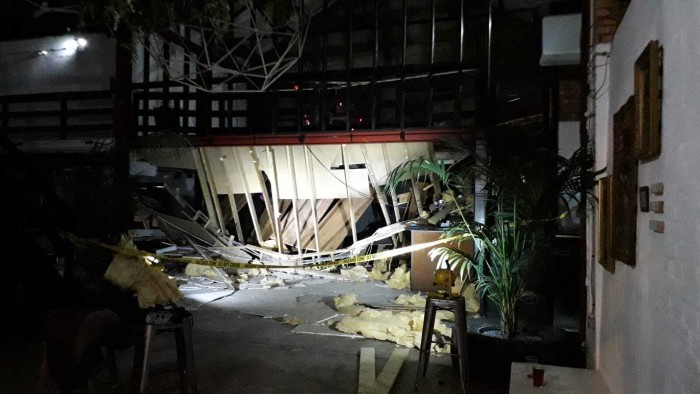 Thirteen people were injured when the mezzanine floor of an East London bar collapsed on Saturday afternoon.

Emergency services were called to Two More Years on Roach Road in Hackney Wick shortly before 17:00 GMT, firefighters rescued seven people who were trapped inside.

James Purdon was one of four people taken to hospital for treatment, in a statement on Twitter he wrote: “Almost 24 hours in A&E following the Hackney Wick collapse at Two More Years. Bruised back and torn ligaments but still alive!” He went on to thank the emergency services for “responding so quickly”.

The collapse happened as two local football teams, Clapton CFC and Stonewall FC attended the bar after a match. Clapton CFC have since confirmed that “the three Clapton CFC folk taken to hospital after yesterday’s Hackney Wick bar collapse” have all now been released.

In a statement on Instagram, the bar said that “thankfully no one has sustained any critical injuries” and that the “venue will remain closed for now and all dinner reservations and party bookings are cancelled”, adding that their “thoughts are with everyone that has been affected.”

London Fire Brigade station commander Sacha Clement, who was at the scene, said: “Firefighters carried out a systematic search of the building and rescued seven people from inside.

“They were trapped on the remaining part of the mezzanine floor and crews used a ladder to bridge between the floor and the internal staircase to get them safely out of the building.

“We worked with our emergency services partners and a number of people were treated at the scene and taken to hospital.”

The scene was declared a major incident by the London Ambulance Service, strategic commander of the service, Brian Jordan confirmed that “three patients had potentially serious injuries and 10 had minor injuries.”

The sustainability-focused Hackney Wick bar was opened in August 2021 by Dan Howells, the former general manager of nearby Crate Brewery, and Josh Bowles, co-founder of zero-waste restaurant Silo.

The name Two More Years refers to the amount of time remaining on the lease when it opened.