Florodora - the tale of the tribute cocktail that outlived its inspiration
by Jane Ryan / 14 January, 2022 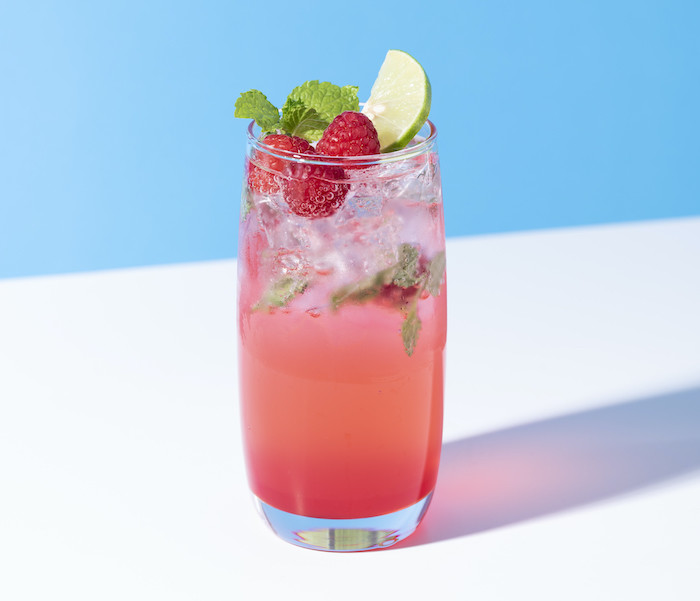 With its stage musical roots, this fruity pick-me-up gives Jane Ryan a rich history to pick through.

Well before the Kim K and Paris Hilton sex tapes dropped, there existed a simpler time when it-girls were instead part of sextettes. And the most famous of them all? The six brunettes of New York’s Broadway hit Florodora.

Most bartenders will tell you a Florodora is a sublime drink, a great pick-me-up and a firm 2000s house favourite, often listed alongside peers such as the London Calling, the Gold Rush, the Ward Eight and the Ivy Gimlet Royale. How the mixture of raspberry, ginger, lime and gin came to be named after the Edwardian version of chorus girls is just as charming as the cocktail itself.

Florodora debuted on the London stage in November 1899, at the Lyric Theatre. Described by drinks historian David Wondrich as “a thoroughly silly bit of musical fluff”, it jumped the pond and landed on Broadway as the new century started. It was, to put it mildly, a monster hit. The plot is tragically no Emmy-winner. Set between a fictitious Philippines island called Florodora and Wales, there were enough disguises to confuse everyone and a strange backstory of a perfume factory producing the elusive yet popular fragrance ‘Florodora’. One of the characters, Angela, brings her six friends to the island in Act I, and then back to Wales in Act II, and it is this famous travelling sextette that catapulted the show to astronomic success. They might have only been showing their ankles but every rich man in New York wanted his night out with a Florodora gal.

We know, thanks to the gossip magazines of the time, that Broadway’s original sextette cast – Daisy Green, Marjorie Relyea, Vaughn Texsmith, Margaret Walker, Agnes Wayburn and Marie Wilson – all married millionaires, and in the early 1900s at that. One even married a South African diamond magnate, while another’s extremely rich spouse popped his clogs shortly after they said “I do” and left her with an absolute pile of cash. Essentially, if you were lucky enough to be brunette and five feet four inches in 1900 you wanted to be cast in Florodora.

It was only a matter of time before a clever bartender produced a drink to please these pretty six, or, as Wondrich says: “If ever there was a show that demanded to be commemorated with a drink, preferably a fragrant, slightly silly one that hits like a roll of quarters in a clutch purse, it was this one.”

According to an article published in 1901 by the New York Evening World, there was an after-show party one night in a Columbus Avenue restaurant. One of the Florodora girls was there and royally pissing everyone off with her persistent refusal to drink anything but lemonade. “If you’ll get me something brand new,” she said, “I’ll drink it.” The paper then goes on to say: “Jimmy O’Brien, the head inventor of drinks, was called. He thought until the noise of his thinking drowned the electric fans.” Bit cruel to poor old Jimmy’s brain cells, but the result was a Florodora.

The original recipe asks for three or four dashes of raspberry syrup, the juice of a whole lime, enough Plymouth gin to ‘catch the taste’ and the best ginger ale over crushed ice. “Float a slice of orange and pitted cherry on top, put the stein to your lips, shut your eyes and take an express transport to Elysium.”

We catch up with the Florodora in 1914, where Jacques Straub’s Drinks invites us all to swap gin for cognac to create Florodora, Imperial Style. Then Jack Grohusko’s 1933 Jack’s Manual mis-spells it as a Floradora, and sets in stone a mistake that’s been replicated over and over across the intervening years. The Florodora found some new life in London’s Milk & Honey, where it often graced the changing menu, and therefore filtered down to the likes of Satan’s Whiskers and other ex-Milk bartender-owned venues.

As to the musical, the sextette rather than the plot remained a fixture of pop culture, with a movie in 1930 starring Marion Davies as a chorus girl playing one of the girls in the original Broadway production. It also featured in a song performed by Frank Sinatra, where he sings “Come Up to My Place”, mentioning he wants to see a “girly show” called the "Flora Dora Girl".

There are a few ways you can go about mixing up your own Florodora. The Milk & Honey style uses fresh raspberries and mixes 15ml simple syrup with 10ml ginger syrup as well as the lime juice, gin and ginger ale. Difford’s Guide suggests swapping raspberry syrup for raspberry liqueur, “why forgo the alcohol” Simon Difford muses. Better yet, in addition to fresh raspberries, make a rosé wine syrup and add complexity.

Shake first five ingredients over ice and strain into a Highball glass over cubed ice. Garnish with a lime wedge and a raspberry.

*Pink Peppercorn or Porter’s Tropical are fun flavour additions, but a London Dry is best

**1:1 wine to white sugar, combine over very low heat on the stove