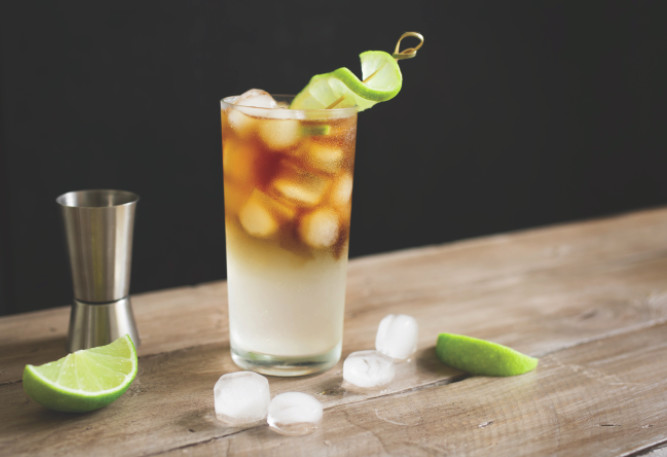 One of only a handful of trademarked cocktails, the Dark ’n Stormy has a long and rich history. Jane Ryan fills us in.

There’s no drink more rooted in boats and seas, in hot weather and rough winds – so much so I swear I can taste the salty lick of the ocean in the first sip – than a Dark ’N Stormy. The secret of its success is not in this tie to the sea and her sailors, however, but instead, and like so many of these drinks I have covered for Class, in the simple idea of two flavours that can stand up to each other. For who else could match the taste bud-blasting potency of ginger than the treacle-like spice and depth of aged rum?

The story of how these two bedfellows met is set in the vast Pacific ocean, on a reef-surrounded tropical island called Bermuda. In the mid-1800s the eldest son of the Gosling family, by then already successful booze merchants in Kent, got on a boat to America to set up shop for the brand in the burgeoning new country. That boat never made it to America, instead it spent a ridiculous amount of time at sea – 91 days, which was about a month longer than it took the Mayflower 200 years beforehand. Docking at Bermuda, the exhausted and frustrated passengers got off and were left to make their own way to America.

James Gosling decided Bermuda was alright by him and founded his family’s shop there. In 1860 he launched a branded aged rum, which was sold from the barrel. At some point the rum started being decanted into old champagne bottles and sealed with a black wax, hence the name Black Seal.

As to the other component, ginger beer was fairly common in the 1800s, especially in the Caribbean where the British navy used it as a cure for sea sickness and, at the time, Bermuda played host to plenty of Her Maj’s sailors and various British immigrants. The meet cute between the island’s rum and ginger beer isn’t documented, but we can hazard a guess it was an easy jump to make – just like gin and tonic. Neat rum is tasty, but on a hot day in Bermuda a splash of ginger beer and perhaps the luxury of a few ice cubes clinking in your tankard would have far greater appeal. As to the name? That apparently comes from an unknown sailor quipping the drink was “the colour of a cloud only a fool or a dead man would sail under”. Someone call Pirates of the Caribbean, we’ve got the next movie title.

The Dark ’N Stormy seems to have hung around Bermuda until America decided to try a little experiment we call Prohibition – changing the history of cocktail culture forever – and parched travellers found themselves on boats to whatever island was nearest and soaked in rum. The Dark ’N Stormy became a holiday drink, and an easy one to replicate once repeal happened, ensuring Dark ’N Stormys were a regular staple of American bars from pre-WWII onwards. But here’s where things get interesting. The Gosling family had spent a hefty sum on promoting their island drink to use their island rum, and in the 1970s they slapped a trademark on it.

Why? Other rum companies began promoting the serve abroad, in North America and western Europe. Not fair, said the Goslings. When it comes to trademark law and recipes, things get complicated but the easiest way to understand this is that you can make a dark rum and ginger beer drink in whatever bar you fancy, but you can’t call it a Dark ’N

Stormy, not unless it uses Goslings. This isn’t just in theory. Since earning the trademark the company has defended it on several occasions, taking action against other rum makers and even a blogger. Cocktail geeks will already know that there are only three other cocktail names which are similarly protected – the Hand Grenade, the Painkiller and the Sazerac.

Bartenders in Australia are oddly enough exempt from this trademark, thanks to an oversight which meant the company never established it there and local rum Bundaberg acquired it. But if you think you can sidestep this law by calling it a Dark ’n’ Stormy or a Dark & Stormy or any other iteration then you’d be wrong – trademarking doesn’t disappear because an apostrophe was added.

Some fans of the drink, and plenty of bars in Bermuda, will say it cannot be made with anything other than those two ingredients, but try telling the global community of bartenders who have taken that simple idea and perfected it with ginger syrup and lime juice, or pursued further more daring twists.

Instead of sharing a classic recipe, which are a dime a dozen on the internet, why not follow the journey of this drink from sunny shores to a basement in London’s Shoreditch where Alastair Burgess’s twist, called the Perfect Storm, surely helped pay Happiness Forgets’ rent for most of the bar’s life. It’s the only drink that has been on its menu since day one and is still there, after Happiness celebrated its 11th birthday in April. Just as refreshing and boldly flavoursome as the Dark ’N Stormy, but appropriately tweaked and made a little more interesting for a modern palate.