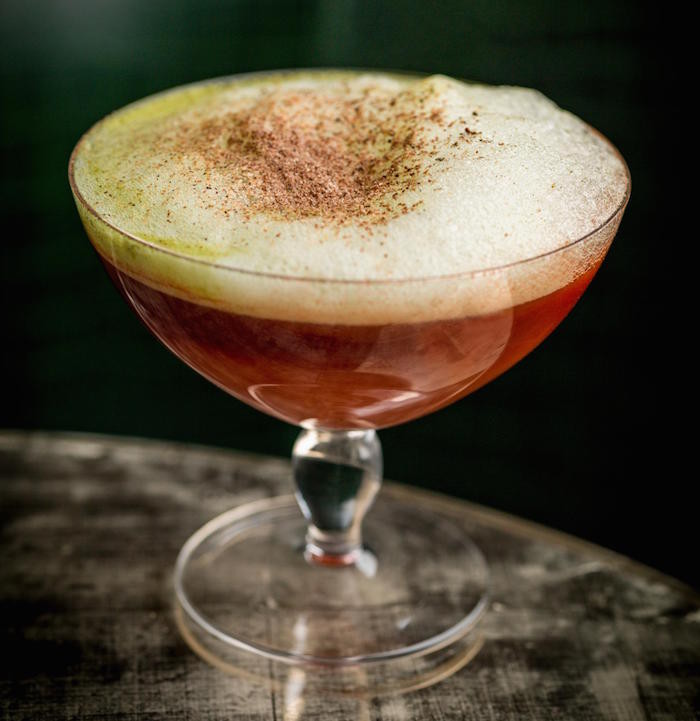 Jane Ryan traces the history of the most famous hangover ‘cure’ ever invented.

Bloody Marys are the kings of brunch, the mighty restorers and curers of the hangover. They’re what you sip when you need a gentle slap of flavour and dash of vodka to shake the sleep from your eyes. They’re also made to be tampered with – dolloping on extra spice, grating in some ginger or drizzling honey to whatever quantity makes your taste buds sing.

It can’t have gone unnoticed, however, that the modern-day Bloody Mary has somewhat evolved from the original 1920s version, entering into its own 21st-century garnish arms race. No longer content with just a celery stick or lemon wedge, today when you order the classic it could come out with an entire smoked fish wobbling on a skewer or a KFC bucket of wings perched on the side. As Ryan Chetiyawardana once said to me, it’s “the most pretentious cocktail out there. No I don't want a burger and a langoustine in my drink”.

Charting the history of the Bloody Mary is like asking at what point did Granddad go completely bonkers. Just when did this drink become more about the food it could balance on its rim than the contents inside? And at what point should the bartending community have talked it off the ledge and out of Susan’s Instagram story? Well, the answer, as you might expect, starts with its parents. Or should that be parent?

Before we let George Jessel and Fernand ‘Pete’ Petiot slug it out for the title of creator-in-chief, we must look a little closer to home and a non-alcoholic concoction that was doing the rounds in 1890s London. The Oyster Cocktail, for “the benefit of those who may be possessed of suicidal intentions”, called for tomato juice, salt, Tabasco, lemon juice, horseradish, black pepper and seven small oysters, stirred together and served warm. It’s the warm bit at the end that makes you want to bring up all the other ingredients in quick succession is it not?

However, the mention of this drink in a London publication (Hospital Gazette) in 1892 gives the background to the savoury and rich flavour combination we find in a modern Bloody Mary – minus acting as a cure for mental illness. But what about the addition of vodka?

George Jessel, a 1920s film star, has his claim to the Bloody Mary dating to 1927, when he says he invented the drink one morning after an entire night on the sauce. Having not quite made it to bed yet, and with a 9.30am volleyball date creeping ever closer, Jessel decided he needed to sober up, and sharpish. Trying an array of cures to no avail, the bartender reached for a dusty bottle of vodka that he simply couldn’t shift. Try this, he’s purported to have said, and Jessel, having taken a sniff, asked for it with tomato juice – 50/50 to kill the smell apparently. After a few sporting quaffs the decidedly pissed Jessel started to feel better. All hail the potent power of a Bloody Mary.

Fernand ‘Pete’ Petiot is also hailed as the Bloody Mary’s creator and his story is the one typically accepted as gospel. Working in Harry’s New York Bar in Paris he’s said to have mixed them for the likes of Ernest Hemingway (I mean, what this man wouldn’t drink is probably more interesting than what he would), Rita Hayworth and Humphrey Bogart. Petiot took his drink with him after leaving Paris, first to London’s Savoy Hotel and then to New York’s St Regis Hotel, where he remained at the King Cole Bar until his retirement, probably initially serving his creation with the more readily-available gin before reverting to vodka, and all the while calling it a Red Snapper.

So who do we believe? The Vaudeville star or the bartender? As Petiot confessed to the New Yorker in 1964: “I initiated the Bloody Mary of today... Jessel said he created it, but it was really nothing but vodka and tomato juice when I took over...” – essentially confessing it was a two-man effort.

What we can safely say is that the flavour profile of the Bloody Mary existed before either gentleman added the vodka, and even Petiot acknowledges this was Jessel. What Petiot gave the world, however, was a palatable and professional version.

By the 1950s the Bloody Mary could be found across the US, the UK and pockets of Europe, ultimately starting to gain traction as a lunchtime drink. By the 1980s it was entrenched in golf club lunches and ladies’ brunches and seemed to have altered little in its recipe from Petiot’s Red Snapper of the 1930s. “Thanks to its restorative qualities, the Bloody Mary is a great cocktail to start the day, replenishing the body with vitamins. In addition, the tomato juice base and combination of seasonings lend the drink an earthy and mouthfilling taste that suits breakfasts or brunches,” says Ago Perrone, director of mixology at The Connaught Bar, which serves one of today’s greatest modern Bloody Marys.

But how did we move from a gentle brunch tipple to the garnish arms race of today’s Instagram fodder? The change happened at the time we often refer to as the ‘cocktail renaissance’, when the Cosmopolitan was being revived by Dale DeGroff and the original Milk & Honey was poised to open. First came DIY stations at restaurants, which added the likes of mango juice, meat broths, clam juice and shrimp to the usual line-up of ingredients. And we thought the Oyster Cocktail sounded grim. Its position as a brunch drink also gave way to indulgences, excess and a general attitude of why the hell not? After all, that’s the logic we apply to the food we consume at brunch, opting for all-you-can-eat buffets and bottomless Mimosas. It’s little wonder the Bloody Mary got roped into the frenzy. Introduce social media and you’ve got images of the cocktail topped with bacon-wrapped cheese balls going viral. Long gone were the 1950s tulip glasses garnished with an olive. The Bloody Mary just got super-sized.

“Excessive reinterpretation,” answers Perrone when asked what makes a bad Bloody Mary. “If you try to overdo your Bloody Mary, you end up shifting away from the core flavours and making a different cocktail. Stick to high-quality ingredients and ice, as well as to a simple but impeccable execution to achieve a balanced texture. Simplicity is key to the Bloody Mary. If it looks overcomplicated and visually unpleasant, chances are it is going to be bad.”

Like all trends, however, the over-the-top, burger- garnished Bloody Mary is already in retreat. We’ve outdone ourselves and, trust me, there isn’t anything new left to garnish one with. Throughout it all, the top bars around the world never stopped producing a good and restrained Bloody Mary. An international firm favourite is, of course, Perrone’s, standing the test of a decade at the London hotel. “When we designed the first menu with Erik Lorincz and the rest of the team we set ourselves the challenge to honour the classics while embracing creativity and innovation. The Bloody Mary, along with the Martini, represents the ultimate highlight of this approach. An iconic cocktail, the Bloody Mary has always been a team favourite, therefore we decided to hero it with an elegant and original take that would still convey the simplicity of its essential flavours.”

In this version the celery is elevated from garnish to key ingredient. Perrone’s team make a celery air, enhancing the sight, smell and taste of the drink. “In addition,” says Perrone, “moving away from the traditional serve on the rocks, the texture becomes uniform, offering a more enjoyable body to the palate.” Peppered with a homemade blend of spices, the Connaught's Bloody Mary is a beautifully balanced and delectable reinterpretation of the legendary reviver.

What made the Bloody Mary so susceptible to its ornate toppings and excess ingredients is also what makes it an unbeatable classic, and still a bestseller worldwide. “Its simplicity offers great room for experimentation and reinterpretation, and this is what makes a cocktail a timeless serve,” says Perrone. And, as with every classic, creating a great Bloody Mary, no matter how far you've come from the original serve, is what makes a great bar.

Put all ingredients in the shaker filled with ice and roll. Strain to a coupe glass and garnish with celery air. Grate nutmeg on top.