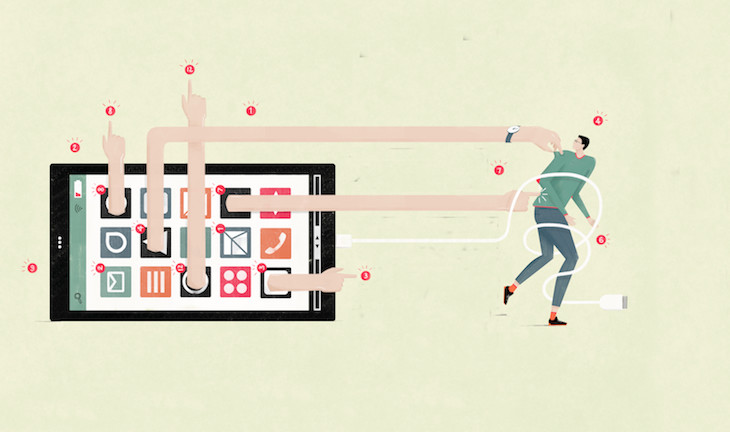 Social media has dramatically changed the way we share and consume information. But as platforms mature and consumers wise up to sponsored content, the next five years are set to look very different, finds Lucy Britner.

Some kids make their Facebook debut before they are even born, every part of their lives catalogued – from an in utero scan to their first day at school. Dogs, cats and hedgehogs have Instagram accounts and last year [2019] an egg took the record for the most-liked Instagram post (it’s currently at around 54m).

In the UK, two-thirds of the population are “active social media users” (Statista), while, according to AI-powered social media marketing company Socialbakers, platforms such as Facebook “touch a third of the world’s population”.

Pretty much every bar and brand has some form of social media presence and, for the everyday user, social media has become a source of information and the main communication vehicle with friends, family and businesses.

But as platforms mature, what comes next? Which ones will survive and how will we use them? Will we witness the fall of the influencer or perhaps the rise of digital blackouts as social media fatigue sets in?

Omri Erel, SVP marketing at Socialbakers believes the next change in consumer habits will be driven by social commerce. “More and more customers will make purchases directly from social media platforms instead of heading to a shopping site’s app or to an online store,” says Erel. Discovery, engagement and direct purchase will serve to make social media “even more valuable” to users and marketers, he adds.

Looking to the next five years and smaller groups, dark social (emails and private messaging) and video content will drive social media, says Nathan Stringer, trends consultant at consumer trends specialist Foresight Factory. The look and language will change, he predicts, as millennial-driven filtered and posed posts, often in glamorous locations, will be replaced by “low-fi” gen Z-ers who prefer “casual, functional messaging”.

For bars and brands this could be as simple as sharing a Google calendar event or an email newsletter. “Stuff that’s basic [and] works,” says Stringer. “People have signed up for it and there is no glitz and glamour around it and no question of ‘is this sponsored content or not?’”

Gen Z’s move to Finstas (‘fake’ Instagram accounts) is also a nod to this new world, as they have felt the need to cultivate a second, private and more realistic persona that is usually shared only with close friends.

Along with Instagram, relative newcomer Tik Tok is getting lots of attention. The short-form mobile video app was rolled out on an international scale in September 2017 and, according to Socialbakers’ Erel, it recently hit one billion downloads and boasts more than 500 million monthly active users. “Tik Tok is undoubtedly a platform for food and beverage brands to watch in 2020,” he adds.

Foresight Factory’s Stringer also mentions Tik Tok, owing to its appeal to younger consumers. He says the platform’s influential “e-boys and e-girls” create content not in far-flung beach locations but in their own bedrooms.

Still under the influence?

Stringer says that, once the preserve of the famous, “there has been a backlash to influencer use” – and one that some brands are taking advantage of. He highlights a campaign by Miller Lite to ‘unfollow’ the beer. Those who did, and sent a pic to prove it, received around $8 towards their next Miller Lite purchase, designed to be consumed with friends, in person. “They are tapping into a particularly millennial backlash,” he explains, reiterating the different look and sentiment of ‘low-fi’ gen Z influencers.

John Robertson, who started lifestyle blog The Everyday Man in 2012, also earns money from social media brand partnerships. “When this whole thing started, the people regarded as influencers didn’t know they were doing it,” he says. “They didn’t get into this with that sole purpose. Sadly, nowadays it’s seen as quite a glamorous job and as such lots of people want to get involved for the perks.”

Though he says the steady stream of sponsored posts have affected the credibility of ‘real’ influencers, he believes it is “still a valuable advertising tool”.

In fact, according to Zenith’s Advertising Expenditure Forecasts, 2019 marked the first year advertisers were set to spend
more on social media platforms than on print.

The notion that consumers are increasingly seeking out reviews and trusted voices has created a “huge opportunity for influencers and brands to team up to create authentic connections with audiences”, adds Socialbakers’ Erel.

When it comes to industry content creators, bartender and social media consultant Francesco Braun – known to his 72,000 Instagram followers as just_imbiber – says social media is the best way for bartenders to promote themselves.

“Social media is the easiest way to grow a network... Instagram will continue to make a difference for bartenders over the next five to 10 years,” he says. Braun estimates it has taken him three years to build his network. “I used to spend two hours a day on Instagram, learning how it works,” he says. “The advantage back then was there weren’t as many of us in Europe. Now there is much more competition.”

He also makes an interesting observation when it comes to social media: that our need to constantly check social channels and post updates can affect a business. He says avid social media users “take double the time to finish a drink” and the quality of a cocktail is also therefore affected.

Combating antisocial media use has seen the confiscation of phones, banning of laptops and creation of wifi-free zones, but neither Stringer nor Erel see this becoming the norm. Stringer believes

the blackout trend will become “larger than it is but never a majority activity” – more the preserve of a self-selecting few. For Erel, the next generation’s ‘digital native’ status is also an important factor. “If users would like to designate mobile/laptop-free zones in public places, the people managing the social space will need to cater to that desire,” says Erel. “However, gen Z is the most social-savvy connected generation, having grown up in a hyper-connected world, doing everything from banking to dating online.” Though it’s omnipresent, in this high-tech world, it looks like the future of social media is set to be low-fi.