The best Irish whiskey for the Irish Coffee
by Hamish Smith / 12 February, 2020 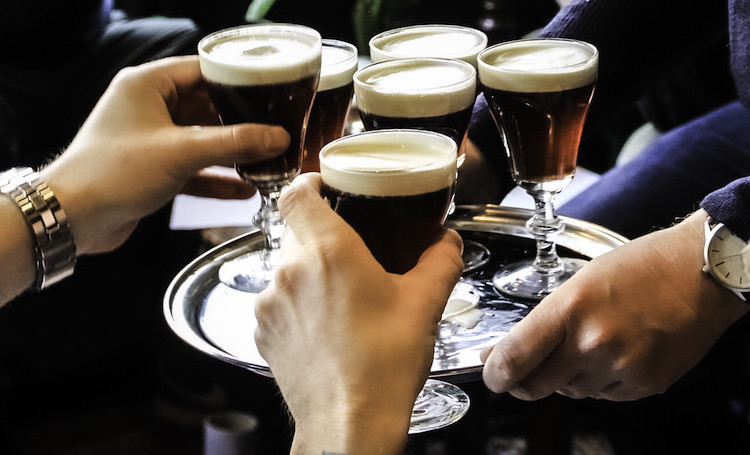 The moment we decided on Irish Coffee, we thought Homeboy. London’s bastion of Irish hospitality has sold thousands of this classic serve in its first year of business, to the point it’s become the drink synonymous with the Islington bar. Owners Aaron Wall and Ciarán Smith have poured their cocktail knowhow into fine-tuning the Irish Coffee for a new, discerning audience.

But this all came a little later – the first brushstrokes of the Irish Coffee’s renaissance were painted on the other side of the pond. The Dead Rabbit’s reboot of this once-dusty classic has transformed its fortunes Stateside and given Irish whiskey a fashionable classic to call its own. Other factors conspired too. The Irish whiskey industry’s awakening and subsequent frenetic growth in recent years has carved space on the back bar and the drink’s other key element, coffee, has seen its own craft movement too. It hasn’t taken much to put the two together. Dick Bradsell’s Espresso Martini led the coffee cocktail charge in the mainstream but the Irish Coffee is making inroads too – it’s now in the top 50 most-made classics in top bars globally, says Drinks International’s latest list.

You might argue that, given its glasspartners (coffee and cream), the whiskey isn’t the protagonist in this drink, but that’s surely old thinking. There has to be a gain from getting the right whiskey. Certainly, at Homeboy, no element has been overlooked. They use 35ml spirit, which at time of writing was Dead Rabbit Irish whiskey, on account of its imposing abv (44%) and spicy notes. After much testing on the coffee, they eschewed craft coffee, says Wall. It’s commercially roasted, because he found its burnt, rich notes dovetailed better with the whiskey. The coffee is filtered using a Moccamaster and kept warm (82°) in sous vide for service. The drink is built in a classic Irish Coffee glass, with 10ml demerara sugar dissolved in the 70-80ml of coffee, five dashes of Homeboy Irish Coffee Bitters, topped with cream and garnished with nutmeg. For the Cocktail Lab we omitted the nutmeg to give our brave tasters a fighting chance.

Alongside Wall was co-owner Smith and his bartenders Colm O’Neill and Dilynn Walker. The rest of the panel - chosen by Homeboy - was completed by Barney Ingram of Dare, Daniel Kaizen from Wet & Dry, Stewart Lee of Gin Monkey, Emanuel Ferris-Hue of Laki Kane, Mark Jennings from the Scotch Malt Whisky Society, Kealan Lafferty from Original Sin, Thom Solberg from Callooh Callay and Joel Fraser from Seven Tails. Well-practised at delivering large orders of Irish Coffees, co-owner Wall made the drinks.

As ever, the spec and process were the constants throughout the tasting, only the spirit rotating through our 10 brands. Naturally, you’ll have your own idea of the most relevant brands to test – the category is now so big we could have probably chosen 20-30 well-known expressions. In the event, we channelled the selection based on flavour profiles and relevance – no limited or esoteric barrel-finished editions, just the classics. Mostly rail blends – Jameson, Tullamore, Bushmills, Paddy and Dead Rabbit, we threw in a couple of more expensive single pot still whiskies for good measure.

For the uninitiated, the first round of the Cocktail Lab is a blind tasting. Scores filed, judges are informed of the price per bottle and abv so a second judgement can be made – this time on value for money. The two scores are aggregated forming overall scores and a league of the brands. Turn over to find out what brands make the best Irish Coffee.

Paddy, owned by Sazerac but produced at Irish Distiller’s Midleton, was our overall winner, scoring second on taste and first on value for money. Tasters picked out fruit and nuts on the palate and remarked at a long finish. All this flavour for a 40% abv blend – the panel were surprised when they later learned the whiskey’s identity. Though it was second to Redbreast on taste, given it was almost half the price Paddy is great bang for buck our panel said, adding it would make a great house pour.

The single pot still whiskey from Irish Distillers’ Midleton would have been a pre-tasting favourite and it met with expectation, with the consensus being this made the best cocktail of the day – 85% on taste is one of the highest scores in the Cocktail Lab ever. But purchasing decisions include bottle price too. Some were happy to pay for the best (mostly bartenders), others more willing to compromise in favour of a good price (mostly business owners).

This one brand makes up the majority of Irish whiskey sold globally, so it’s probably the most likely to be found in an Irish Coffee. Good choice world, our panel’s scoring implies – it finished joint third on taste. Vanilla and soft dried fruits were detected with many remarking the drink was just what they’d expect of an Irish Coffee (see opening sentence). Its low price impressed, achieving fourth spot by our value measure, which, while good, failed to improve Jameson’s overall score.

Tullamore was among a group of brands that all scored in the 70s on taste. There wasn’t much to separate third to ninth by this measure – all performed well in glass and on palate. Tullamore was praised for providing a smooth Irish Coffee in which the whiskey remained in the driving seat. Its sub-£25 rrp gave the blend the second highest value for money score, boosting its ranking to second. A good price for a whiskey that makes a good Irish Coffee.

One of a group separated by a few per cent on their taste credentials, Bushmills was considered appropriate for the Irish Coffee. The collective lowdown was that Bushmills could be detected through the coffee and cream, offering balance and fruit notes, but it lacked the impression or complexity of some of the best. Tasty, simple but affordable, was the summary of one judge. Its value for money score (this was the cheapest in the tasting) reflecting what most judges saw as bang for buck.

Diageo’s burgeoning Irish whiskey brand fared well in the taste stakes, with judges describing it as big and punchy, if not complex. For some, this robustness is what the Irish Coffee needs, others were more concerned with balance against the other components. The 45% abv was seen as a plus, though the near-£30 rrp took the appreciation down a few notches. The panel considered others to offer better value for money.

Teeling’s malt-led blend finished joint third on taste – so if that’s the only measure that matters, it had a strong showing. Tasters talked of vanilla and tropical notes – a legacy of the ex-bourbon and ex-rum casks the whiskey was matured in. Though the highest abv of the tasting at 46% judges didn’t notice any extra punch. The abv is normally reflected in the price and, at £35, judges didn’t feel this whiskey was suitable as a house pour for the Irish Coffee.

Our curveball of the tasting was a peated Irish whiskey in the form of Beam Suntory’s Connemara. The panel spotted the smoke immediately, many guessing at the brand. The feeling was that this made an interesting twist on the Irish Coffee and it scored pretty well. A fun spin, they said, but not appropriate for a house Irish Coffee. Punters might be put off, they said. With a price tag of £34, any lingering argument was lost on value for money.

The joint venture between Quintessential and the eponymous New York bar is the whiskey of choice for the Irish Coffee at Homeboy. The panel were relatively impressed, picking out stone fruit, spice and an abv which perforated the coffee and cream. Dead Rabbit was in the pack separated by only 8% on taste, so its taste rank of 7th is a little misleading. In the overall ranking, its rrp of £40 pulled it back. It wasn’t considered best value.

Slane’s subtlety wasn’t suited to the Irish Coffee, with panellists almost universally agreeing it didn’t have the clout to shine among its glass-partners. One conclusion was that the whiskey had to make its presence known. Slane, more grain than malt-heavy blend, failed in this regard and its middling price, £27 rrp, failed to convert the detractors. It may be a good whiskey, but not for the Irish Coffee.